While Class A RVs get all the love when you’re focused on luxury, another great way to go is a top-end fifth wheel. They don’t cost nearly as much as other options out there, and you’ll get a setup that’s just as luxurious – if not more so.

The only catch is that you’ll need a truck that can tow it, but even when you add those two costs together, they’re often cheaper than a high-end Class A. So, why not enjoy the same luxurious lifestyle while saving a little money with a fifth wheel?

In this guide, we’ll break down everything you need to know about the best fifth wheel construction before diving into some of the best options out there!

While this decision comes down to personal preference, in many ways we found the best quality fifth wheels are from Grand Design. They offer tons of high-end models to choose from – and everything about them is luxurious.

Whether you’re looking for an extra bedroom because you’re traveling with another family or a spacious living area for when friends come over, Grand Design offers it all.

What Is the Best 4 Season Fifth Wheel? 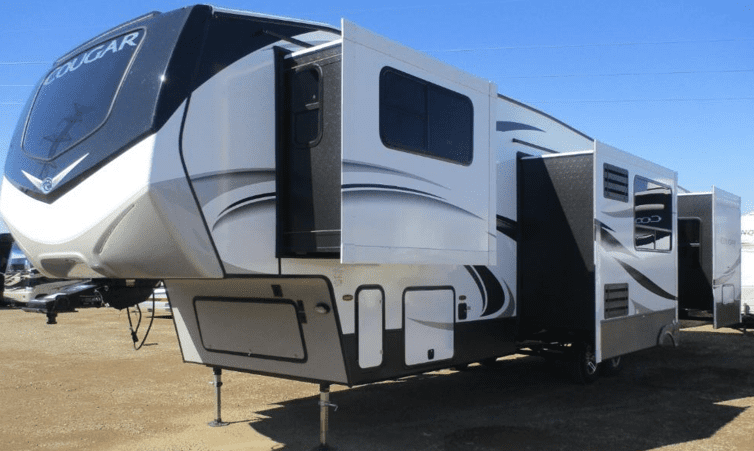 One of the nice things about a fifth wheel is that they work great year-round. Unlike travel trailers that lack the necessary insulation to keep you warm when the weather gets cold, high-end fifth wheels are 4-season friendly.

Because of this, our best quality fifth wheel is also our best 4-season fifth wheel. The Grand Design Reflection is a top-end choice that works great no matter what time of year you want to travel.

Just keep in mind that no matter what fifth wheel you get, when there is snow and ice on the ground, it’s exceptionally hazardous to tow a fifth wheel.

Do 5th Wheels Hold Their Value?

While every RV is going to depreciate in value as it ages, fifth wheels tend to hold their value better. There are several reasons for this, and we’ll break them down here.

First, fifth wheels usually have a better construction than travel trailers – their closest direct competitor. Because of this, as they age, fewer things go wrong with them, which is a significant boon to its value. 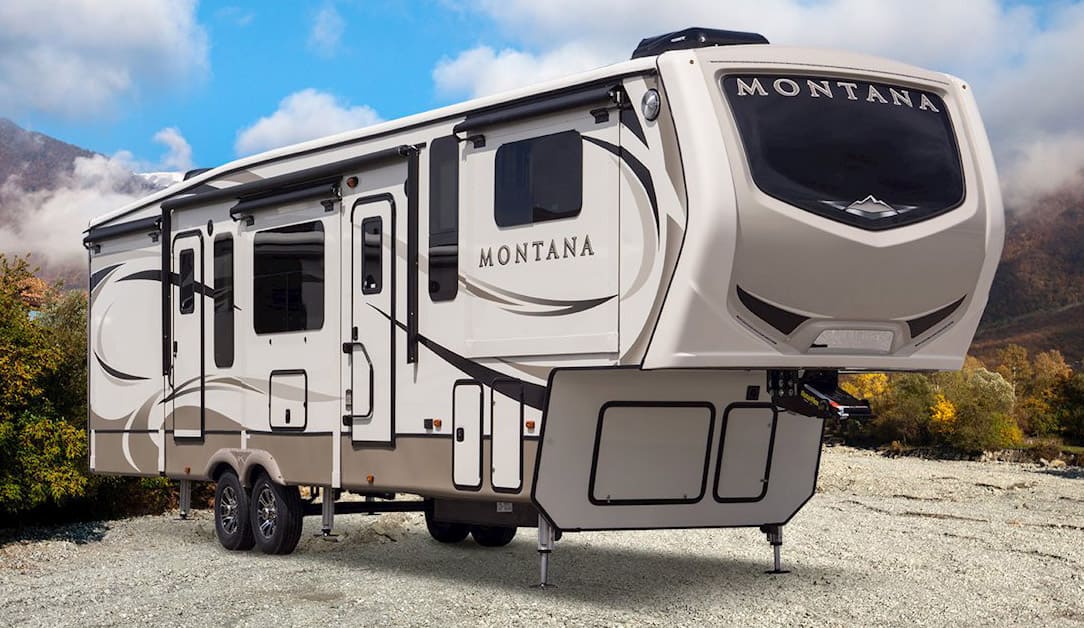 If you’re looking for a premium fifth wheel that gives you tons of options to choose from, there’s no better choice than the Keystone Montana. The Montana has 22 different floor plans to choose from, which is more than twice as many as its closest competitor.

Each model comes with a 50″ television in the living area and a 32″ TV in the master bedroom. From there, you get a spacious 18-cubic-foot refrigerator and washer/dryer hookups in each model.

Having all these features standard across each floor plan is incredible because you don’t have to feel like you’re picking and choosing features when you’re finding your ideal RV.

In addition to their 22 different floor plans, they have two décor options to choose from that allow you to match your own sense of style to your RV. Because these aren’t cookie-cutter RVs, you’ll likely be able to find something you absolutely love.

Their floorplans sleep anywhere from four to eight people, so whether you’re looking for extra sleeping space or a more complete fifth wheel for you and your spouse, they have a great option. However, even with 22 different floor plans, they don’t offer an option with a separate bedroom area.

What’s really lovely about the Keystone Montana is that it comes with features that experienced campers look for. For starters, they come with a 66-gallon freshwater tank, which is big enough to hold you over between stops.

Furthermore, they come with an option for SolarFlex solar panels. If you’re looking to head a little farther off the open road, this is a huge perk. Not only do you have enough water to hold you over, but you also have a way to recharge your batteries without hitting up an RV park.

Finally, these Keystone fifth wheels are on the heavier side, with some floorplans weighing in at over 14,000 pounds. 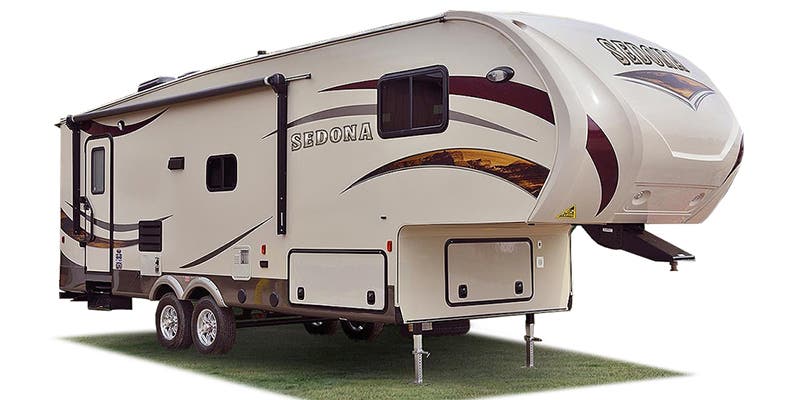 Just because you have a truck with a fifth-wheel attachment doesn’t mean you can tow anything you put on it. With the Gulf Stream Sedona 28CBF, you get a lighter weight fifth wheel your truck should be able to handle easily.

With an unloaded vehicle weight of 7,500-pounds, it’s among the lightest fifth wheels that we looked at. However, its lighter weight doesn’t mean it lacks in features.

It can sleep up to ten people and has dedicated bunk beds for a more comfortable sleeping area. As far as amenities, you still get a full kitchen, a skylight over the shower, a flip-up counter, and a large split sink in the kitchen.

However, it has to drop weight from somewhere, and the result is a smaller 6-cubic-foot refrigerator, no washer/dryer hookups, and a disappointing 44-gallon freshwater tank.

Finally, while the Sedona 28CBF has a full bathroom area, it’s on the opposite side of the RV from the master bedroom, which is a little disappointing. 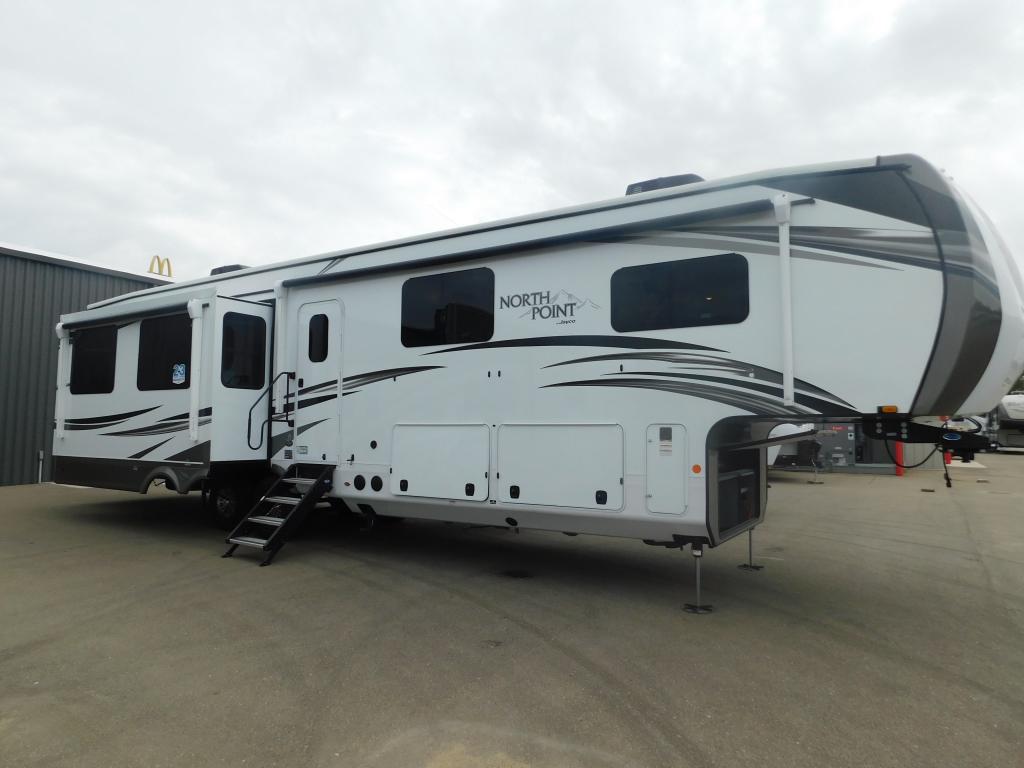 Jayco has been in the RV business for a long time, and they’ve mastered their high-end products. Their North Point fifth wheel line is the epitome of a well-thought-out fifth wheel. They have seven different floor plans to choose from, and they all come with great amenities.

For starters, an 18-cubic-foot refrigerator and a four-burner stovetop come standard. And no matter where your design interest lies, they have an option for you. Some of their floor plans have multiple bathrooms, while others have up to three interior televisions.

If you’re looking to spend more time outside, they also have floor plans that offer both interior and exterior kitchens. Even better, with a 75-gallon freshwater tank in each floor plan, you won’t have to worry about running out of water in between stops, either! 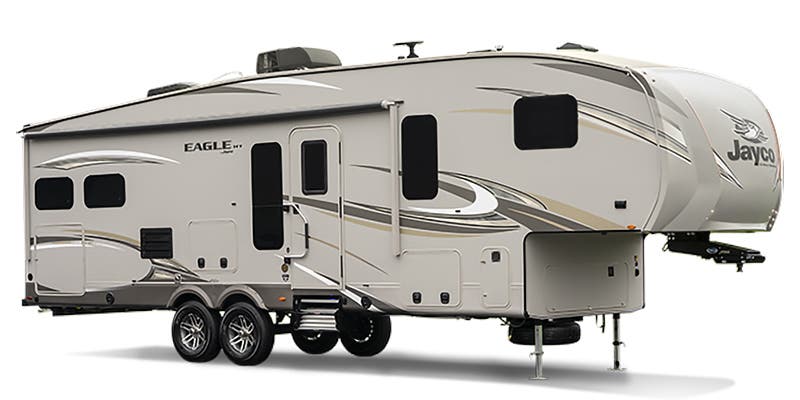 While we highlighted the entire Jayco North Point line, we’d be remiss if we didn’t mention one of their lighter models too. The Jayco Eagle HT 25.5REOK might be a little smaller, but it still comes with all the luxury amenities you would expect in a Jayco fifth wheel.

You get a spacious walk-in pantry that hides behind the entertainment system, and you’ll find a fireplace in the living area. You also get a large residential-sized split sink and everything else you would expect to find in a fifth wheel’s kitchen.

There is tons of overhead storage throughout as Jayco made the most out of the limited living space. But perhaps the best feature of this fifth wheel is the massive 81-gallon freshwater tank.

Since it’s a smaller fifth wheel, you probably won’t have a ton of people on board – making the 81-gallon tank more than you’ll need for most trips.

Finally, the overall GVWR is under 10,000 pounds, making this one of the smaller fifth wheels out there. If you’re looking for a smaller or lighter fifth wheel, the Jayco Eagle is an outstanding choice. 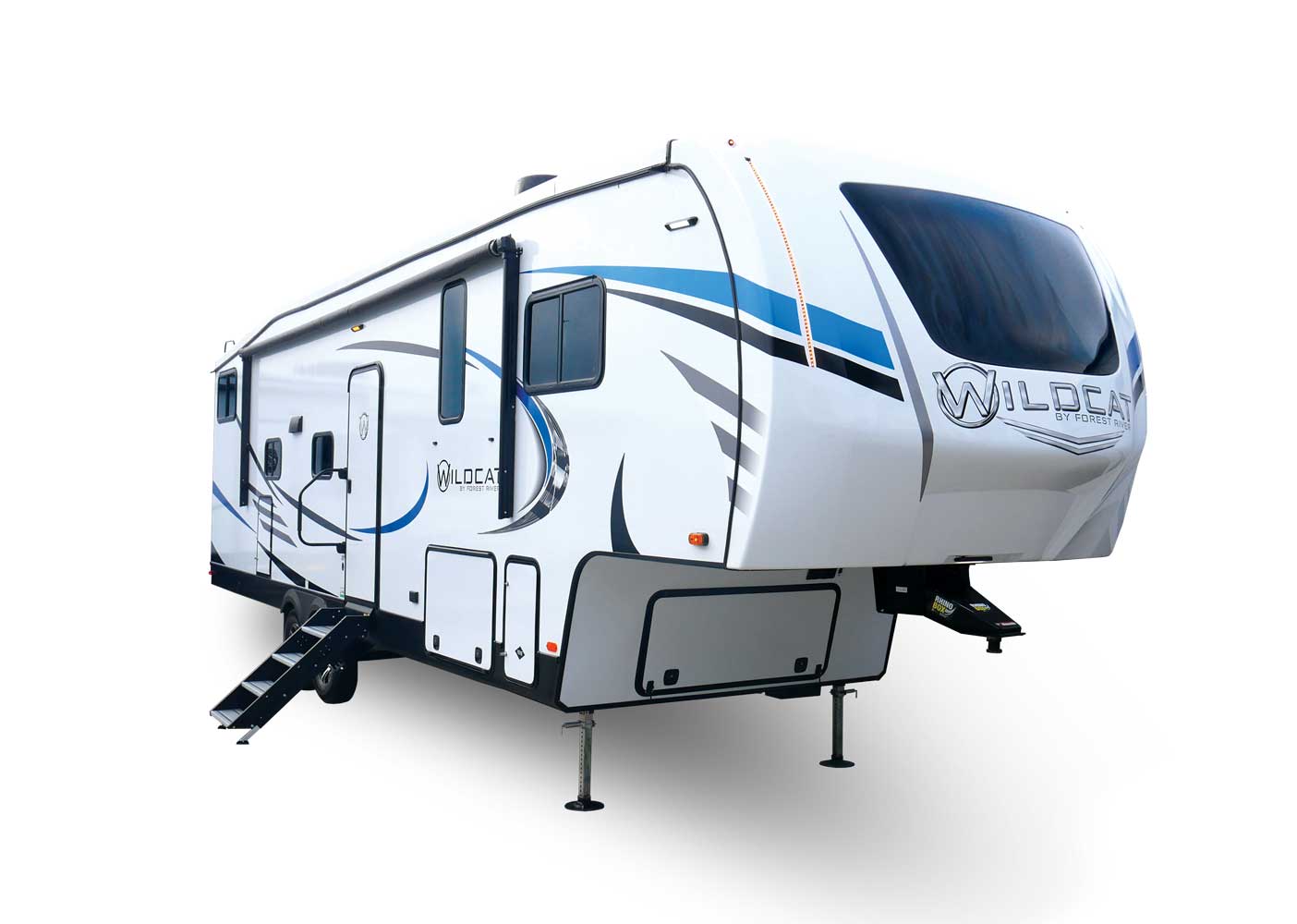 While the Forest River Wildcat line might not be your first choice when you’re picking out a fifth wheel, they’re not exactly lacking either. They have eight different floor plans to choose from, and they offer a nice mix of affordability, durability, and luxury.

The kitchen areas are fully loaded as well, with ovens, a three burner gas stovetop, a microwave, and a large farmhouse-style sink. While the Forest River Wildcat doesn’t have a ton of counter space, it has more usable space than some other models.

In the same vein, the refrigerator isn’t small, but at 10.8 cubic feet, it doesn’t have the largest capacity either. But what really might be the most inconvenient part of these RVs is the 48-gallon freshwater tank.

That’s far smaller than most other fifth wheels, and that’s not an annoyance that many campers want to deal with. But like some of the other lower model fifth wheels, the biggest perk to the Forest River Wildcat is that they offer a model with an unloaded vehicle weight under 8,000 pounds.

This is on the smaller size for a fifth-wheel, so if you don’t have a large enough truck to handle the bigger models, this might be an excellent choice for you. 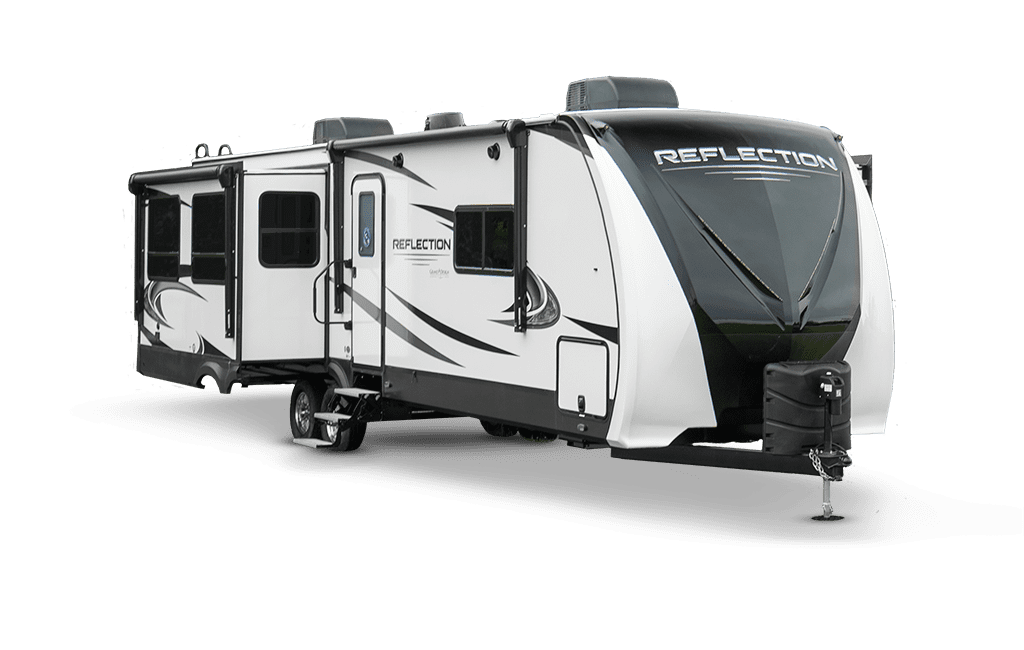 We mentioned that Grand Design makes some of the highest quality fifth wheels out there, and their Grand Design is the best of the best. They offer nine different floor plans to choose from, and every one of them is an outstanding choice.

In addition to the exterior pass-through storage, there is tons of overhead storage throughout, so you won’t have to worry about where you’re going to pack your clothes and gear on your next trip.

But what’s really amazing about these fifth wheels is how they let you get off the open road without worrying about the basic necessities.

That’s because these fifth wheels come with a washer/dryer prep in each floor plan, and with an 80-gallon freshwater tank, you can actually use them while you’re on the road without running out of water.

Each floor plan comes with roof-mounted solar prep, so you can install solar panels to recharge your batteries without having to find an RV park on your next trip. Everything about this fifth wheel is a camper’s dream come true.

If you’re a master chef in the making, you’ll love the fully equipped spacious kitchens, and they even offer floor plans with larger pantries to store all your ingredients. While queen beds are the standard, most of the floorplans have an optional king-bed upgrade if you need the extra space.

That means when you buy a Grand Design Reflection, you can rest easy knowing that the superior craftsmanship will let you hit the open road without any headaches for years to come.

Just keep in mind that while these fifth wheels have everything you could ever dream of, they also weigh a ton. The heaviest floor plans have a GVWR of close to 15,000 pounds, so make sure you have a large enough truck to handle it before you buy.

When you’re looking for a fifth wheel, you want luxury. They’re more spacious than a traditional travel trailer, and because of this, they typically offer more amenities and space to use them.

Even better for some, you can travel throughout the year in a fifth wheel, and you’re not limited to traveling only during the summer.

If you take your time and pick the right model, a fifth wheel is a great way to travel and start your next adventure. Before you buy, make sure you have a truck that can handle these heavyweights – and keep in mind that you’ll need a fifth-wheel attachment in the bed of your truck too before you hit the open road! 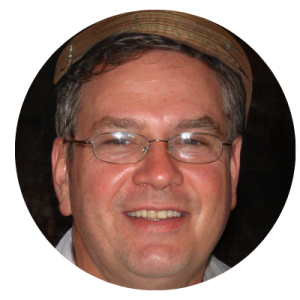